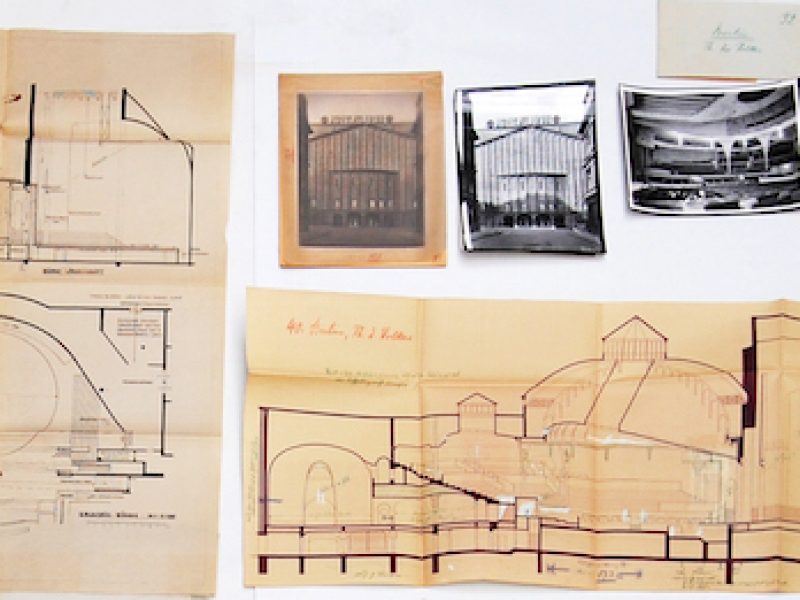 Just in time for the start of the European Heritage Year 2018, the Collection of Theatre Architecture of the Technical University Berlin is going online with more than 10,000 objects. The cooperation project between TU Berlin and Beuth University, financed by the Deutsche Forschungsgemeinschaft, has successfully protected and digitized the collection which is now hosted by the Museum of Architecture of TU Berlin!
The collection houses valuable documents of over 500 theatre buildings mainly in Germany, Austria, France, Slovenia, Poland, the Czech Republic and Russia from the period 1939 to 1969. The materials – floor plans, sections, photographs and written documents – give a unique overview of the state of Central European cultural buildings in the mid-20th century: On the one hand as an inventory of the visionary developments of the 20s / 30s, on the other hand as a documentation of the deconstruction during the National Socialism and moreover, as a vision of the architectural breakup of post-war modernism until the 1960s and 1970s.
Main attraction of the collection is the well-preserved compilation of the handbook “The German Theatre” – a large-scale publication project commissioned by Albert Speer, the General Building Inspector for the Reich capital, in 1939. Until 1943, despite the prevailing war situation over 500 theatres of the “Greater German Reich” were recorded using a standardized questionnaire, photographs and drawings. But in fact the book was never published. Fortunately, 319 of these portfolios could be saved and were rescued by the Technical University in 1969. A second focus of the collection is the extensive photo estate of the German theatre architect Gerhard Graubner. In addition to competition designs from the 50s and 60s, his well-known post-war works such as the Schauspielhaus Bochum, the Schauspielhaus Wuppertal, the reconstruction of the National Theatre Munich and many other of his theatrical buildings are documented here.
Three cooperation partners: The Museum of Architecture and master programme Bühnenbild_Szenischer Raum TU Berlin, as well as the master programme Theatre Engineering Beuth Hochschule Berlin, formed an interdisciplinary working group, which is now heading to a further phase of the project to pursue the scientific evaluation of the obtained data.
By now the collection is made fully available online at the platform of the Museum of Architecture TU Berlin, therefore making a valuable contribution to the preservation and visualization of cultural heritage in Europe.

Find out more (only in German)

Goethe’s drama on the stage Who – where – what – three questions for everyone planning to stage Faust. Who is playing the principal[…]

A fascinating study about literary and plastic representations of romantic ballet Around 1830, the romanticism is well established on French and European stages. The ballet is[…]

Preserving, photographing and describing a costume collection This practical “how-to” is the result of a collaboration between Het Firmament, Resonant and[…]