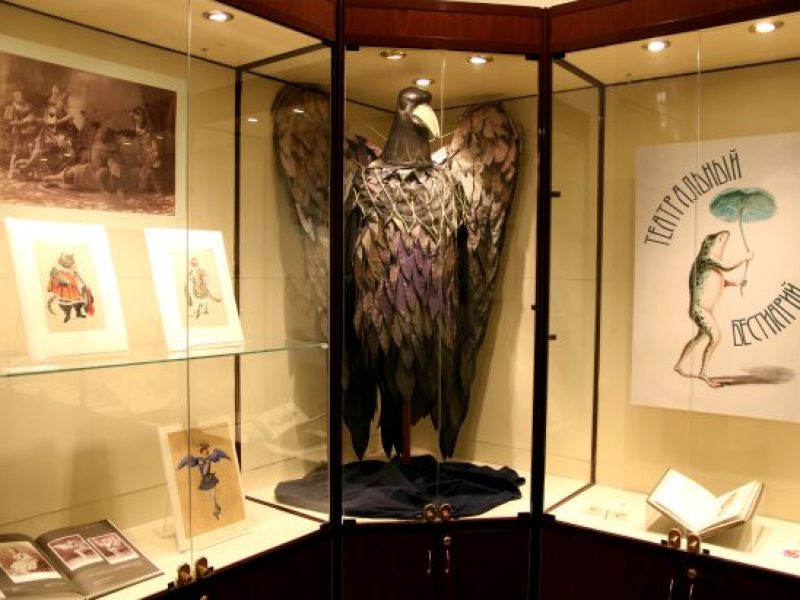 
Theatre costume is an important element of the theatre image. It helps the actor to express the character’s appearance and to discover the inner world of the stage hero. Saint-Petersburg Theatre Library exhibits the costumes which were created only by theatre artists in order to show on the stage different animals, birds and other imaginary beings.
The spectators may see the transformation of beast’s costumes beginning from the 19th century through today, viewing the sketches of outstanding theatre artists in the 19th century such as Ivan A. Vsevolozhsky, Konstantin A. Korovin, Michail P. Klodt, A. Al’ber as well the sketches, theatre costumes, and puppets of modern theatre artists such as Nelli N. Ivanova, Tatyana K. Sotnikova-Ratner, Vladimir I. Firer, Elena Y. Orlova, Maria V. Lukka.
The exposition also represents puppets and costumes of Saint-Petersburg Fairy-Tale Puppet theatre.

Exhibition: Museum of the Arts of Puppetry, A Reinvented Museum

The first three rooms of the new exhibition display are now open. In France, the Musée des Arts de la Marionnette is the only[…]